We are still enjoying warm weather, not quite ready for the chilly days of fall just yet …

September can be such a beautiful month. Although the temperatures tend to dip slightly in August, inevitably, when the kids head back to school in September, the weather turns warm again! We have been lucky to enjoy rather mild weather of late. The garden, having been quite patient all summer while I left it to its own devices, is now demanding that I pay her some attention. I love working in the garden, don’t get me wrong. We were just busy with life!  So little by little, we’ve managed to extend some time and effort to get (some) things done in the garden. 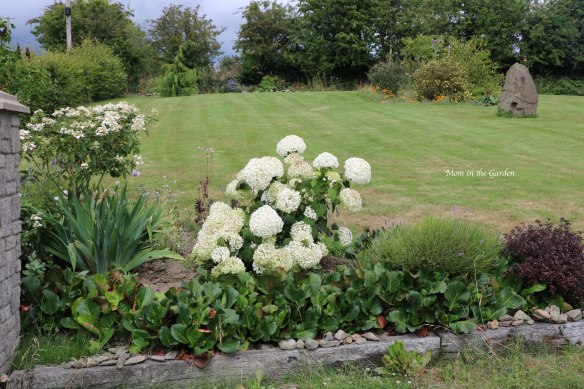 If I could draw your attention to the green leaves along the edge of the railroad ties, those are Bergenia, a deep pink flowering variety, which have spread a bit more than I’d like.

Bergenia flowering in May

These Incrediball hydrangea were a lovely white in August, but turned a rusty brown quite quickly, unfortunately. The Bergenia, on the other hand, have done really well! This was the clump (on the left) before we separated them.

One of the items on our “to-do” list was dividing up plants. I think it is pretty safe to say that Bergenia plants, also known as elephant’s ears due to the foliage, are extremely hardy! These guys are so happy in my garden, and they have just flourished (read: multiplied exponentially!). I wanted to remove a few to prevent them from clumping too much. But before I knew it, my husband had dug them all up! So we’ve spread them out, and moved them around the yard. 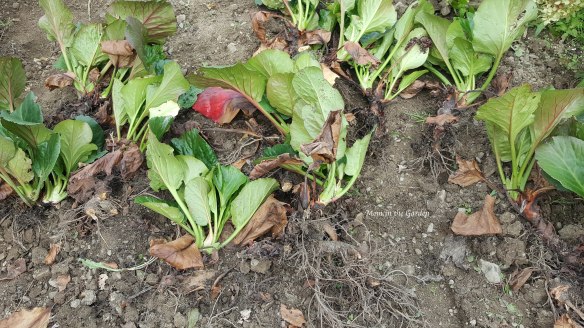 The Bergenia plants needed to be separated as they had clumped together.

Staying in this same bed, my Iris ‘Benton Storrington’ are also quite happy here. My original purchase of two plants has yielded more than a few!

I originally bought two plants and now I have, well, LOTS!

I actually had to move them because they were spreading into one of my hydrangea plants. I’ve simply moved them to the other side of the same bed (hey, if they are happy here, I don’t want to rock the boat!). But first I untangled their roots to separate them. That worked with most of them, while a couple of them had to be cut apart. There was quite a clump! 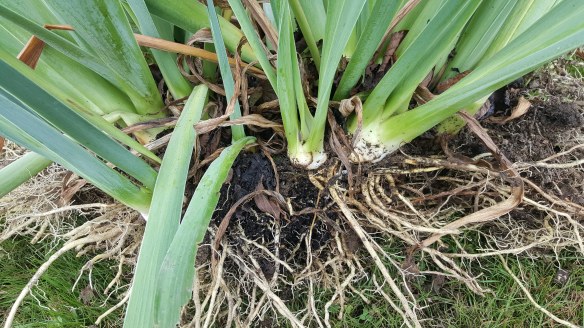 quite a tangle of roots! This is why you have to separate them!

I forgot to remind my husband that the rhizomes, in order to get exposure to the sun, need to be at the surface, and not buried in the soil. So when I noticed his mistake after he’d planted a few, there was a teeny tiny moment where he just stopped and looked at me, shook his head, and then proceeded to re-plant them, correctly this time. Good thing he’d only done a few! 🙂

Iris Benton Storrington – which you can see is growing into the hydrangea!

There was one more plant which we divided, another Iris actually, although this time not a bearded variety (so no rhizomes to keep at the surface!). I don’t have any pictures of what the area looks like now. But, here is a picture from before we moved any, when they were in bloom. The perspective is “higher” as I was actually leaning out of my bedroom window (being very careful though!). 🙂 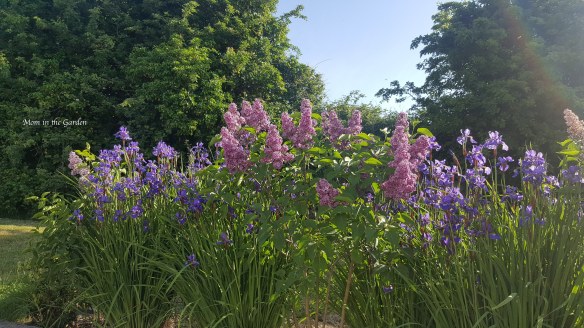 Lots of Iris and Lilacs!

They are very pretty, and apparently they, too, are very happy as they have spread like crazy! My idea was to separate them and spread them about the yard. But for now, we’ve taken one clump out of the mess and moved it further down the bed, and we moved another clump to the “Center Garden”. 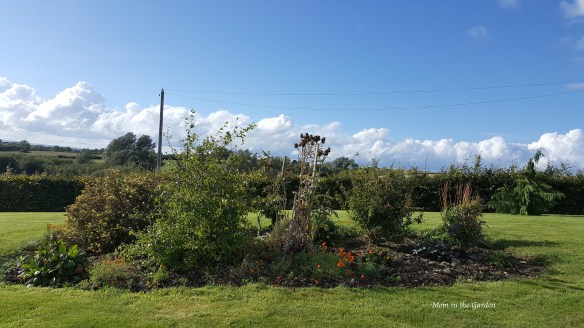 I am really happy with how our Center Garden is taking shape. I wasn’t sure if I should add anything else to it, but I think the Iris will be really pretty. 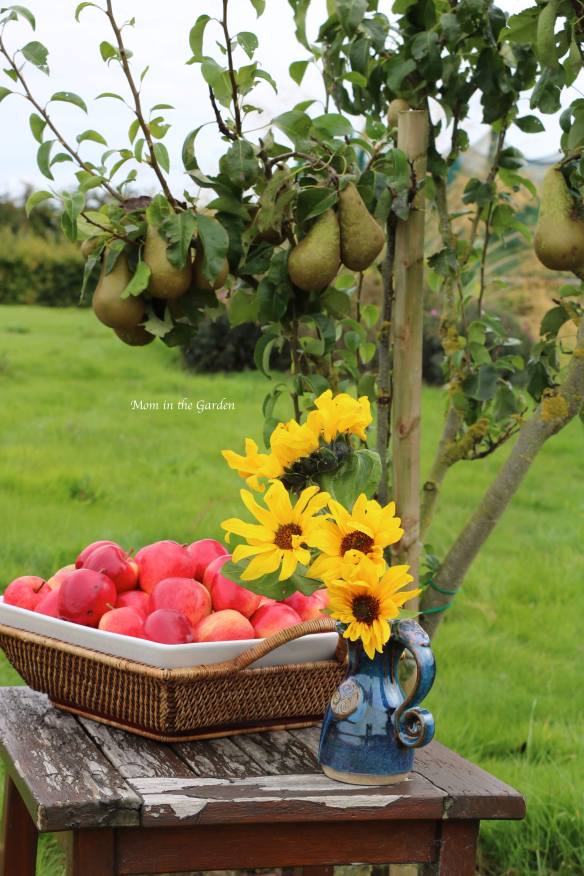 Pears, Apples and Sunflowers from our garden

My gardening takes lots of patience while I figure out how to get it just right, and watching as things mature and fill in spaces and provide structure. I LOVE this process! It is so neat to watch the garden throughout the entire year as it changes from one season to the next. I am constantly thinking of “what’s next” in the garden. I have a list in my head of all of the plants I want to add, and changes and additions to the garden. But right now, I am completely happy with exactly how it is, weeds and all! As for the gardening “to-do” list, let’s just say that I am happy that we are making progress! 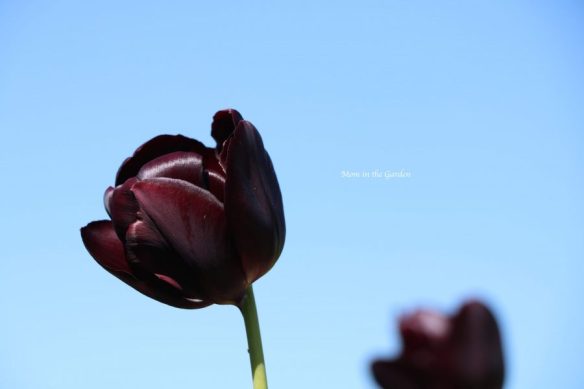 Queen of the Night Tulip

I love spring! It is so nice to welcome in the warmer weather, the singing birds, and the colorful flowers.  These are such simple pleasures, and all it takes is a conscious effort to stop and make the time to appreciate them. I genuinely LOVE these simple pleasures! This is what I hashtag #beautyallaroundyou.  (Sorry, I can’t help myself!)

It is also the time when I plan out any changes or additions to the garden.  I add at least a few new things to the garden every year.  I just like to have something new to look forward to! 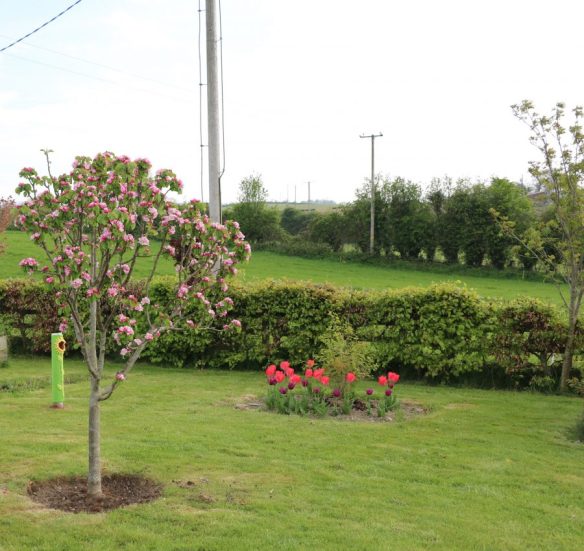 The viburnum in the photo(s) above isn’t new. I had it in a pot for two years.  It was happy for the first year, and then it wanted more attention which I neglected to give it.  So I hoped it would be happier in the ground, and so we planted it at the end of last season, and then added tulip bulbs around it last fall.  The viburnum has lots of little blooms on it, but they are a light green still, whereas when they are in full bloom the flowers will be white.

I have some (O.K., LOTS of) ideas for additions to the garden.  I have to pace myself though, as it is a lot of work to take care of!  I don’t use any chemicals, so that means there are a lot of weeds to pull!  It also means that there are a lot of weeds I don’t get around to taking out, and that is O.K., too.  I really enjoy working in the garden, but I want to be able to enjoy other activities, too, so I just have to be conscious not to over do it.

This garden needs some more tulips!

The above picture shows the bed which has the pink parrot tulips in it. They are near the end of their lives in this picture.  But we have lost some of these tulips over the years, and I really would like to get more for this bed.  The bright pink flowers in front are bergenia and they are doing great!

bergenia in front and parrot tulips in the back

I will be changing around our vegetable/fruit garden a tiny bit.  I have been focusing more on flowers than food, and the garden just needs some adjustments.  It is all part of maintaining a balance.  Here’s a look at some of the fruit that looks great right now in the early stages!

blueberry flowers and a bee 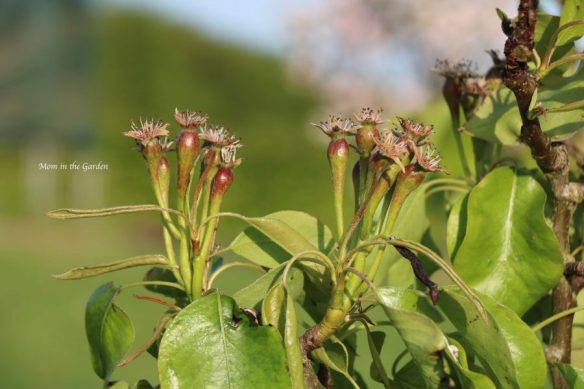 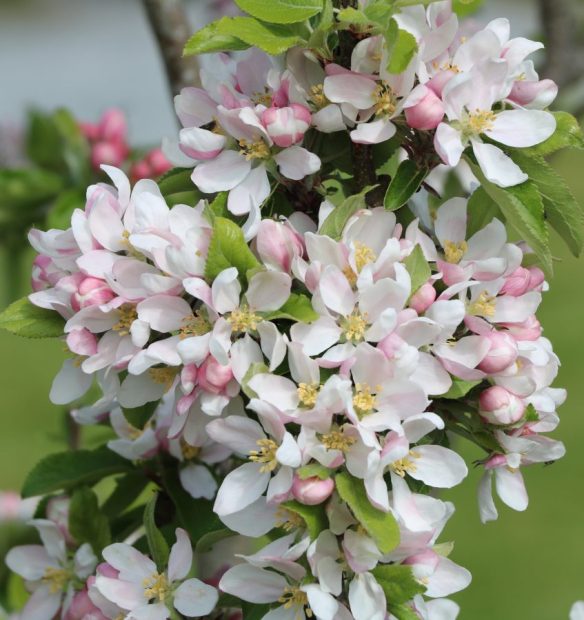 But my favorite bed at the moment is the one that has our Japanese Maple. It took us nearly three years to realize our Japanese Maple was extremely unhappy (we had different issues with it along the way).  But I think we’ve managed to finally get it right with this tree, as it looks beautiful this year!

I find it peaceful and rejuvenating when I get to spend time in the garden.  Oh, and I also LOVE to take pictures!  Lots and lots and lots of pictures! 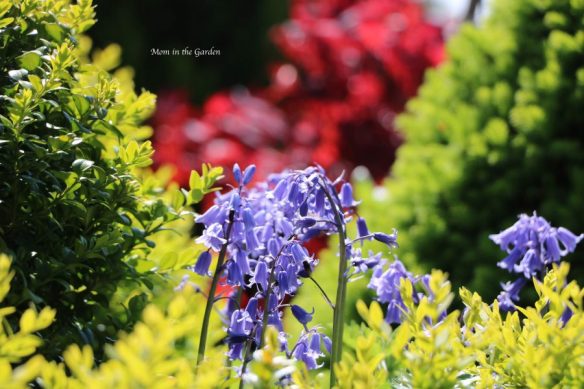 I hope you also get to enjoy some time in the garden! But either way, I hope you enjoyed your visit to my garden. 🙂

Do you name your garden beds?  I do.  But as the beds change and evolve so do their names.  This bed was formerly known as “messy garden”. 😉  It still is messy, actually, but it has become quite colorful so I think our new name of “Rainbow Garden” is much nicer. 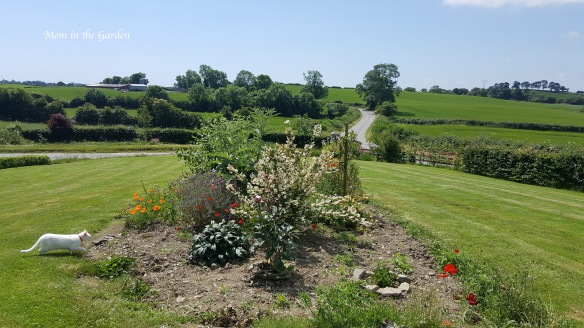 The “messy garden bed” in June (plus Kitty)

The above picture is a “neat” view of our messy bed.  It was early in the summer, and the Deutzia (the white flowering shrub) was in full bloom. We have spent about five years trying different plants (with lots of fails along the way!) to get it to where it is today.  Part of the bed gets quite wet, while part is on the dry side (go figure), we get a lot of wind, and the soil wasn’t in great shape when we started. But now, the bed is really filling in and the plants are doing well. 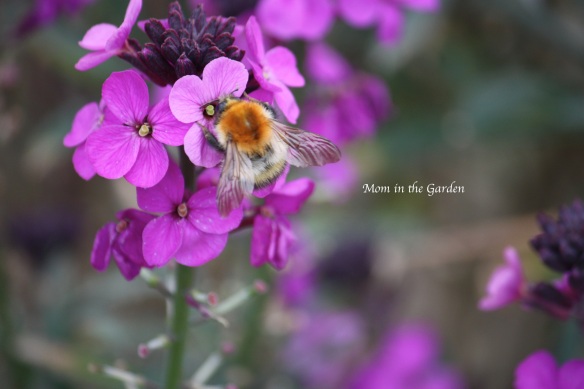 I love to see bees in the garden! (Erysimum Bowles Mauve)

The bed now has two hellebores, a peony, Erysimum ‘Bowles’ Mauve’, globe artichokes, Mock Orange, Cornus florida ‘Cherokee Chief’, a yellow potentilla shrub and some white flowering bergenia.  In the spring there are some tulips, and in summer there are quite a few poppies. And brand new this year we’ve added Zantedeschia aethiopica Crowborough (these are large white calla-like lilies). 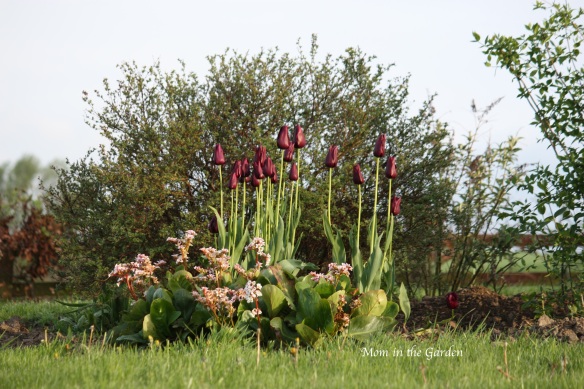 Boy do we have some color now!  The poppies really give a POP of color.  🙂 The California poppies are short with a light orange color and *everywhere*.  There are also several different varieties of annual poppies in varying shades of red and orange.

Rainbow Garden at the end of July

We have enjoyed flowers blooming in this bed all year, starting with our ‘winter sunshine’ Hellebore in January/February. The mild weather here in Ireland has the benefit of early blooming spring flowers, too. Now the bed is almost in full bloom with lots of color!  I’m still waiting on the globe artichokes to bloom.

the Potentilla in full bloom with yellow flowers 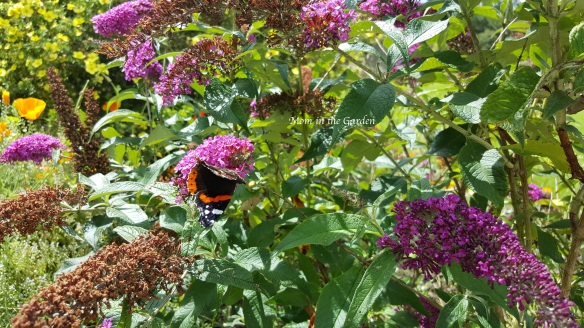 The garden is “peppered” with wild flowers, which provide a few different colors.  I’m still not sure if that was a good idea or not, scattering wild flower seed throughout the bed a number of years ago. I actually thought I’d dug out all of the poppies this year! But I’m glad for their color, and they are easy enough to pull once they are done blooming. 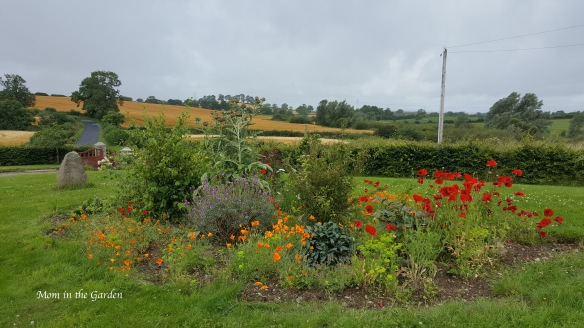 Rainbow Garden on a cloudy day

this view is rather messy, but shows the pretty blue/green leaves from the hellebore

I could certainly look at the bed and think of all of the work which still needs to be done (how about some edging?!). But I choose to only see the pretty, albeit messy, side. Just a few years ago there was nothing there but grass. I like it much better now!

I love living in the country. I find it so peaceful to spend time in the garden. Being able to create different beds with all different flowers is just icing on the cake!

I hope you are able to find some peace in what you do, too. 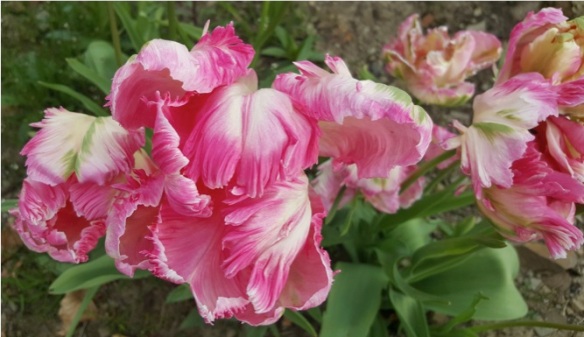 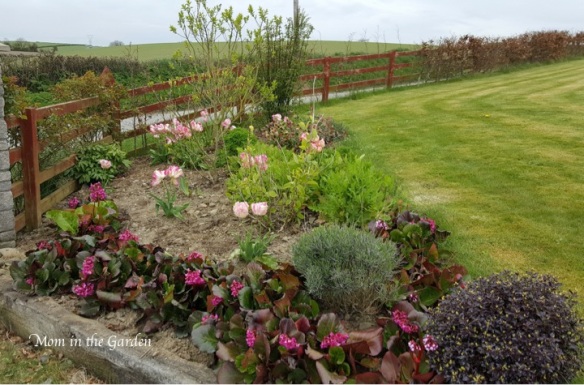 Parrot Tulips in the “Pink” bed

The bed is filling out.  It has: