Vegetable gardening is still new to me. I am learning so much!  But I’m delighted that some things have turned out really well, despite my not doing things perfectly correct.  Take our spuds, for instance.  The early organic variety called Colleens were our first potatoes we planted and we were so excited.  But we had more potatoes than allotted space in that bed.  So we squeezed them in.  Yeah, I know, that was silly.  But we’ve just started eating those Colleens and oh wow! They are delicious! Have you ever dug a spud fresh out of the ground and had it for dinner?  If your answer is “no”, then you haven’t lived.  🙂  And this coming from a girl who really was not a fan of potatoes before moving to Ireland four years ago…

(For our second planting of potatoes we used more space, by the way.)

Our rainbow chard is finally coming along.  We’ve had it a few times for dinner.  I sneaked it into some pesto last week.  Otherwise I just saute it with garlic and olive oil.  I’m still waiting for our peas. They are so pretty, but not quite ready to eat.  I have lettuce in planters on our deck.  I really like that the kids just pop out the back door and pick what they want for their sandwiches.  They also like to raid the strawberry patch, which I am perfectly O.K. with! I’d rather them be eating the fruit than those darn slugs…

My parsley is really doing well. I picked some tonight just to see if it was fragrant.  I wish I had a scratch and sniff app on my blog! It smelled so nice!  I am going to have to find something to cook tomorrow that calls for parsley.  The other greens in the pictures below are my parsnips, and some carrots.  Slowly but surely, vegetables are growing.

Ireland has had a very wet summer, so I’m lucky that the veggies haven’t just floated away!  I hope you’ve had nice summer weather where you live and garden!

It was so easy to dig the potatoes up. One plant has enough potatoes for dinner for our family of five.  I am so hooked! 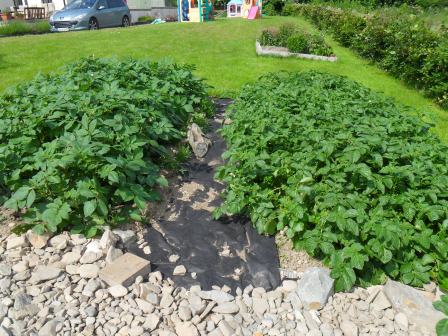 My two potato beds. The early organic Colleen variety are on the right, and main crop organic variety Sarpo Mira on the left.

The peas are so pretty, but not quite ready to eat. This organic variety is called Karina.

Rainbow chard with garlic & shallots in back of bed. 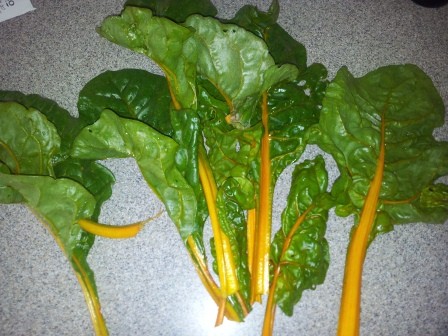 The parsnips are doing really well.

We usually eat parsnips with carrots (more carrots than parsnips), both of which I’ve planted. But only one row of carrots have taken while three rows of parsnips are thriving!  There will have to be some creative cooking this fall!

Italian Giant Parsley grown from organic seed. Can you smell it?

From organic seed Buttercrunch lettuce on our deck.

We have a couple of containers of this lettuce on our deck. My father-in-law started them from seed for me and then we put them in these containers. I find that they do better here than in the beds, and it’s easier (for the kids) to quick get some to eat!

These are a few of the uneaten strawberries from our garden. It’s hard to keep them long enough to photograph!

Black Velvet Nasturtium which we grew from seed.

This was my first year growing flowers from seed, so I was happy with the result … flowers!

You might notice that almost all of the pictures have water droplets in them!  We’ve had so much rain, but thankfully there is usually an hour or two which is dry and sometimes even sunny!  Such is weather in Ireland – it packs everything into each day! 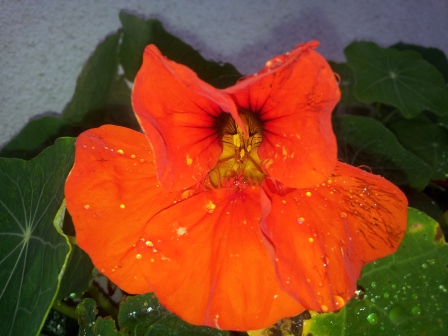 Black Velvet Nasturtium grown from seed. (not sure how this non-black velvet one got in here!)