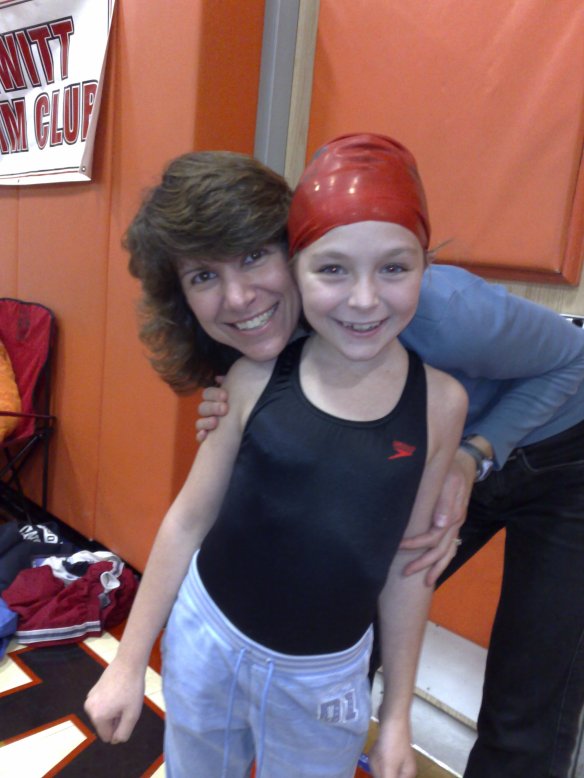 They say all good things must come to an end.  But maybe instead of it being the “very end”, it is just the end of a chapter? … My daughter and I are just home from the Stuttgart International Swim Fest competition, and with the end of that competition is the end of the season for us.  Since she will be going away to college next year, it also means the end of her swimming with the team.  For the past 8 years I have been coaching with the team while she swam.  But with her leaving, I felt it was the right time to say “good bye” to the team. 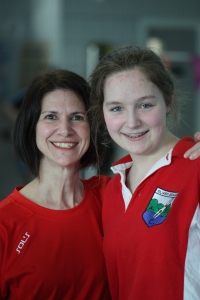 My daughter and I at a Sliabh Beagh event in 2015

I swam competitively from the age of 10 all the way through and including in college.  I loved swimming, and being a part of a team, and I was lucky to have had some very good coaches.  Fast forward a few years, and my daughter, at four years of age, asked if she could join the summer swim team! The summer swim team was all about having fun in the water, and she loved it! After our move across the ocean a few years later, her love of swimming continued and we were super fortunate to be introduced to the Sliabh Beagh swimming club (pronounced Sleeve Bay, and named as such after the mountains in the County Monaghan region). 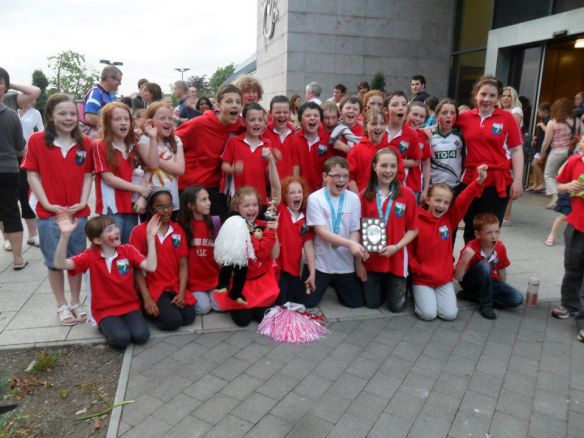 The Sliabh Beagh Aqua Sprint squad after winning their 2012 final

It was at a swim gala in the early days with the club that I was talking with one of the “senior” parents on the team, when the topic of coaching came up. During the conversation she asked if I’d be interested in coaching with the club.  Honestly, I’d never thought about coaching before then.  Also, I wasn’t sure what it would be like coaching the youngest squad!  But I went through the coaching courses, as well as licensing, and pardon the pun, I then dove right in! I was very lucky, the kids were great, the parents were supportive, and our coaching team was excellent. I have learned so much over the past 8 years!

My younger daughter joined the team as well.  I stayed with the younger squad while she was swimming with them, and then moved up the squads as my girls did.  My girls were receptive to my coaching, and never minded when I was in their squad, and I’d go so far as to say they liked it.  🙂

I was a tiny bit surprised how much I enjoyed coaching. I mean, I loved coaching. It was so much fun helping the kids to achieve their best, and watching their improvements along the way.  I’d have to say that I was persistent with my kids, until they were finally able to maintain the changes/improvements in their strokes.  I learned that you can’t coach everyone the same.  That can be a little tricky when you have lanes filled with kids, but I think over the years I managed to figure it out.  My favorite expression from our head-coach (he has LOTS of expressions) is that Rome wasn’t built in a day.  I’ve used that countless times, not just with the kids, but with myself.  It takes time to make changes, and make things happen.

I’ve coached a lot of kids, and I’ve seen kids with natural talent, kids with a huge passion for swimming, and kids with an incredible work ethic. There were, too, the kids who were just in it for fun, and that’s O.K., too.  I think what sticks in my head most is that every little thing counts, and when you focus on all of those little things (one at a time!), you can achieve your goals. It takes time, remember, Rome wasn’t built in a day, but with persistence, it is possible. That mindset is completely applicable to everything in life!

Our family has really enjoyed being a part of this team.  Everyone, from swimmers to parents, to coaches, has been great to work with. Three years ago they started a new tradition of attending an international swim competition near the end of the season.  That has been one of the major highlights for so many of our swimmers and parents! For some, that is the end of their season and they really end it on a high!  We’ve been to Stuttgart, Germany twice and Eindhoven, The Netherlands once.  All three trips were so much fun for everyone! 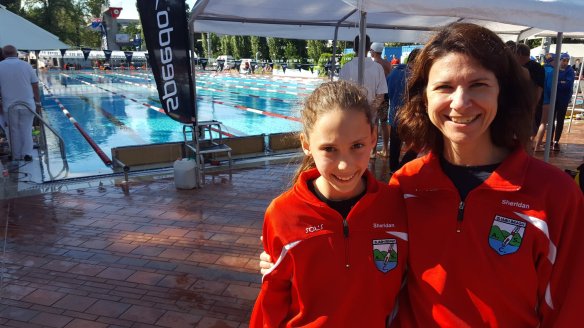 Swimming outdoors, for our Irish team, was so much fun! My younger daughter and I at the Stuttgart International swim fest 2016

It is bittersweet, stopping coaching for now.  I still love it, but our team practices at 5:45 A.M., and it is a 40 minute drive for me.  That equates to an insanely early start to the day!  It sounds a bit crazy to non-swimmers, but to swimmers who understand the dedication that is necessary, and getting in those minimum two hours of practice a day, this is our reality.  And since my younger daughter had to stop swimming last year for medical reasons, I won’t have anyone swimming with the team.  So for now, I think a little break would be nice.

It is wonderful to see the kids continue on and swim in college, too.  Our goal as coaches is to develop Long Term Athlete Development and encourage “Swimming for Life”.  We want to keep kids swimming into old age!  We’re not interested in quick rises to the top and then burnout, which can happen so easily in this sport.

My daughter and I on our way to Stuttgart 2018

I was very lucky. We were part of a team where the swimmers benefited hugely from the way the team nurtures the overall well-being of each swimmer.  They nurture good team-mates, and character, in addition to helping to build top-class athletes. This stemmed from the team’s founders, head coach Eamon and his wife Ita.

I have learned so much from our head-coach Eamon and I had a lot of fun with my Aqua Sprint co-coach Linda!

I am so thankful to have had the opportunity to coach such great kids along side some great coaches and an amazing support team.  I appreciate how wonderful it is to be able to do something you LOVE!

Our team secretary, Claire, who does more for our team than any one human being could possibly do!!!

And just like that, the chapter is finished …  Thank you so much for the wonderful memories,  Sliabh Beagh ASC.  It truly has been a gift.

2 thoughts on “End of a Chapter”