It is Monday!  Mondays mean it is time to join Cathy at Rambling in the Garden for her In a Vase on Monday meme.  For me this is a much anticipated weekly event in my social calendar (I don’t get out much)!  It is great to see the other arrangements and touch base with the other bloggers.  You too can join us here: http://ramblinginthegarden.wordpress.com/2014/11/17/in-a-vase-on-monday-a-vase-for-thomas-hood/

As for my arrangement this week, all I had to do was cut a couple of branches from my climbing roses.  There were so many blooms! (and even more still outside!)

I know some people aren’t fans of Autumn Joy sedum, but I am not one of them. I love it.  It turns a dark auburn colour as it “matures” through the fall season.  It holds its shape really well when it dries, but the colour turns quite dark (basically black).  I would love to try and spray paint some and see what that would be like … I just need more hours in my day! 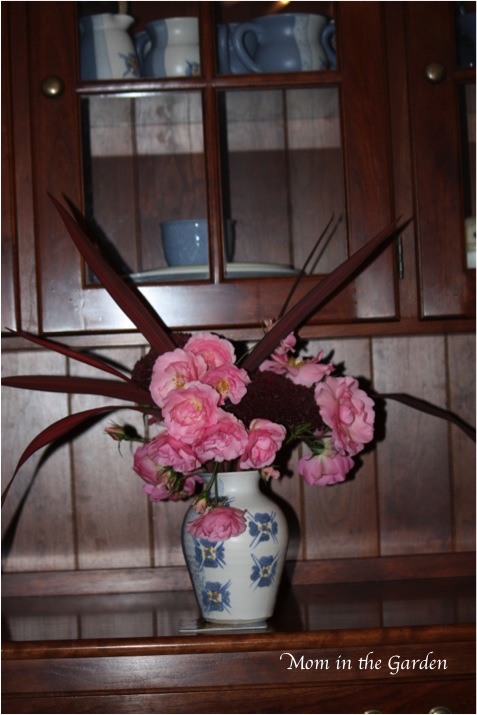 on the hutch facing forward

The vase itself I have used many a time before as it is part of my pottery collection from when we first got married.  I like the pattern on the front of the vase.

on the hutch facing backwards

I hadn’t realized I’d taken a picture of the back of the vase until after I uploaded the pictures.  The blue is really rather boring!  The tall grass-like auburn-y coloured plant material was in the garden when we moved here. I don’t know what it is called. I don’t actually like the plant as I think it looks rather sloppy in the garden, despite my cutting off the dead leaves every winter.  But I did like how it added something to the arrangement.  Now I am being critical and I think it might look funny in these pictures!  You’ll have to trust me that it looks better in person. 🙂

And that is my In a Vase on Monday arrangement!  My next goal will be to remember to have props and themes for my Monday meme (wish me luck on that one)! I’m sure I’ll have no problem with that once I figure out how to add more hours to my day 🙂

14 thoughts on “In a Vase on Monday: Some real pinkness with roses & autumn joy” 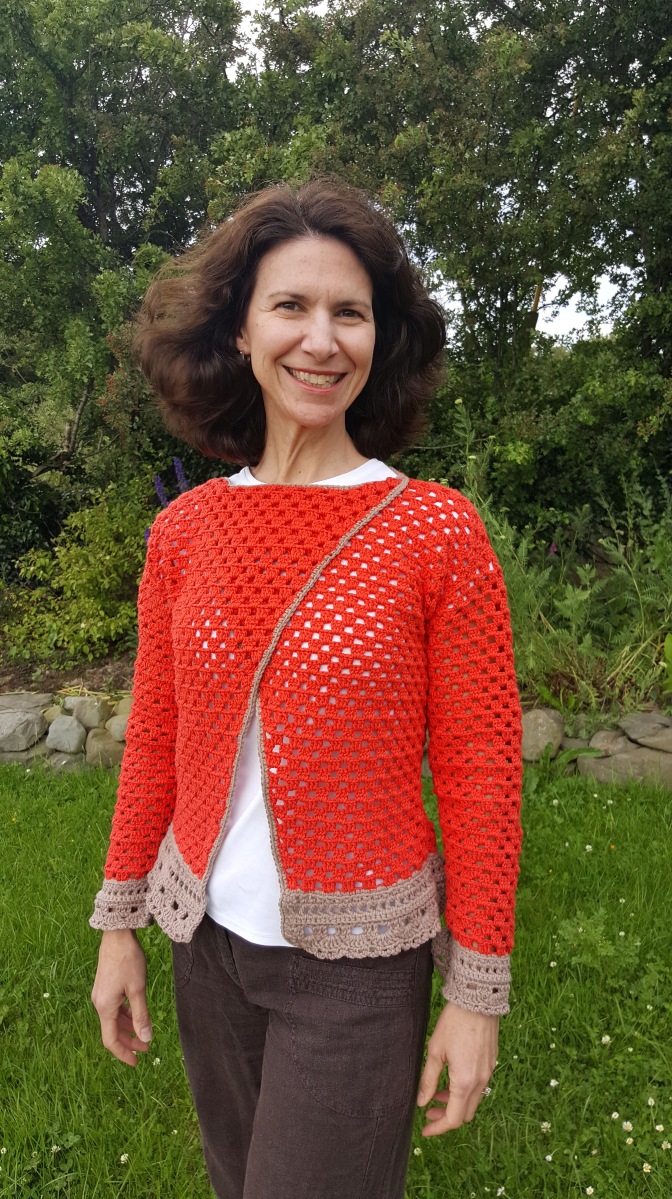 Hi and Welcome to Mom in the Garden! Click on my picture above to learn more about me. I am a mom who loves being in the garden and I enjoy sharing my experiences here. I hope you enjoy them too!

This is the first year this white hellebore has flowers. Worth the wait! . . . #mominthegarden #hellebore #whitehelleborr #inmyirishgarden #inmygarden #garden_lovers #garden_igers #flowerinstagram #flower_igers #patienceinthegarden
New project! New hook! New yarn! Loving all three 😊. I can't believe how comfortable this @clover hook is. Wish I'd switched a long time ago! . . . #mominthegarden #crochet #crochetersofinstagram #cloverhooks #handmade #yarnspiration #yarnspirations #gomitolo
This was a tough lesson for me to learn - it's O.K. to make mistakes! I wrote about it on my blog. And how about this picture? Anyone else see how the morning sunlight highlights it perfectly? Love working with the sun! 😁 . . . #mominthegarden #blogger #countryliving #morningsunlight #canonrebelt6s #inmyirishgarden #inmygarden
I can't help it - these girls are so cute! I gave them some ashes and they got straight to work on their dirt bath. ❤ Rose and Daisy . . . #mominthegarden #raisingchickens #chickensaspets #rhodeislandreds #rhodeislandredhybrid #chickens
Our girls have decided they no longer enjoy being confined to their (rather spacious) run. Our initial attempt of putting wire on top of the fence did not work. 😕 I do wish we could let them roam - if only they'd stay in the yard! . . . #mominthegarden #raisingchickens #chickensaspets #rhodeislandredhybrid #rhodeislandreds #escapechickens #theyreallyhaveitprettygood
%d bloggers like this: