At least once a week I now look forward to collecting flowers from the garden and bringing them inside for us to enjoy in our kitchen.  I rarely did this before, because really I love seeing them outside.  But being a part of the Rambling in the Garden’s meme “In a Vase on Monday” has brought about my new weekly activity (read: obsession)!

My ten year old daughter helped me this time.  It would have been quite a collection of colours if I’d picked all the flowers she wanted!  But she was happy enough, instead, to hold the flowers, in a hand held bouquet as we walked through the yard and cut the flowers which I picked out (with her approval, of course). 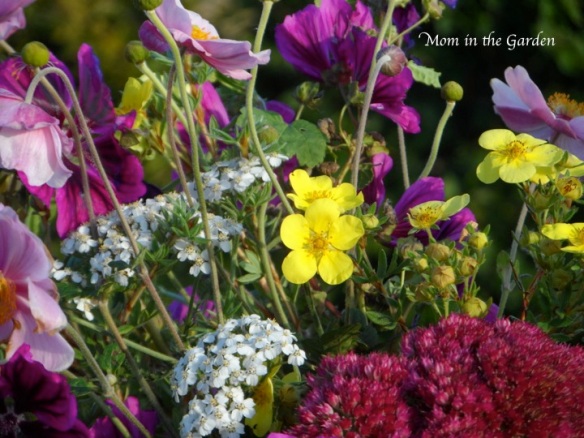 I wish I could say that I had it all planned out in my head beforehand. That was not the case, though. It all started with a large sedum flower with a broken stem.  It would be such a shame to leave that in the garden to die.  So pink became the main colour.

Potentilla with Japanese Anemone (some without their petals)

My potentilla plant has the sweetest yellow flowers.  I had to have that colour in the arrangement!  I also loved the strange shapes of the Japanese Anemone.  They are so interesting looking before they even bloom as well as well after they bloom!

My mallow plant grew quite tall this summer and was blown over and badly broken. I thought that was the end of it, at least for this season.  But we cut it down to a lower level and sure enough, it is full of all new flowers!  I have not been able to really capture the beautiful colour that it is.  The light, bright green of the lady’s mantle is one of my favourite colours! It is popping up in all sorts of places around the yard!  So I was happy to find some that was still young enough to use. 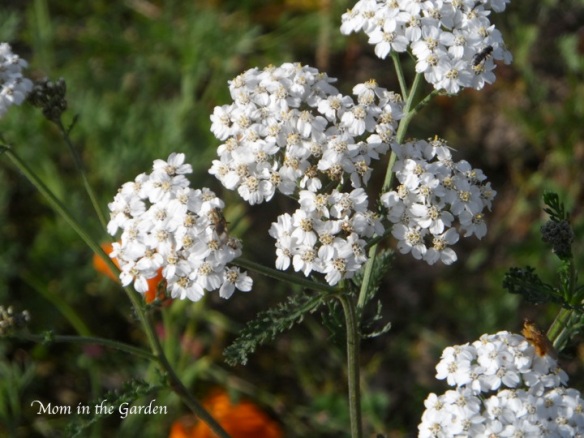 “wild white plant” in the garden

These lovely white flowers are in my “wild flower garden”.  I don’t know their name, but I’d really like to find out because they are so pretty.

Everything arranged and sitting pretty

It all came together fairly quickly and easily. You don’t usually have too much time when a child is involved, anyway! The original vase I was using just wasn’t working for me.  I had too many flowers for it.  So out came this rather large, glass ice container (or white wine cooler/champagne cooler).  I have the marbles on the bottom, as a lot of my stems were too short.

In a Vase on Monday: A Playful gathering of flowers

I really like starting my week like this!  I hope you do, too.  Stop on over to Rambling in the Garden if you’d like to see some other lovely “In a Vase on Monday” posts! http://ramblinginthegarden.wordpress.com

Have a good week!
Dana

15 thoughts on “In a Vase on Monday: A playful gathering of flowers”